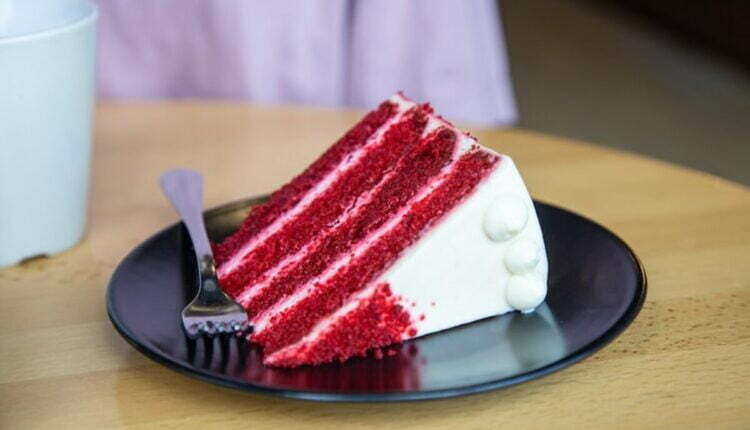 Traditionally, red velvet cake is a crimson colored cake. It is also known as the southern red velvet cake. It has three layers of tender cake topped with a decadent whipped cream cheese frosting.

Red velvet cake is also known for its soft, fluffy crumb. It’s easy to make and tastes great. In fact, few cakes are more popular. Traditionally, it is topped with ermine icing. It has also become associated with Juneteenth celebrations.

If you’re looking for a dairy-free version of this red velvet cake, you can make it with full-fat canned coconut milk or apple cider vinegar. You can also use vegan butter. However, if you want the red velvet cake to be rich and moist, you’ll want to use buttermilk.

Several origin stories have been associated with the red velvet cake. Some say an Austrian immigrant in New Orleans created it. Others claim it was invented in the Waldorf Astoria Hotel in New York. Others still claim an American chef made it in the 1920s.

Traditionally, red velvet cake is made from cocoa powder, buttermilk, sugar, and eggs. It is then topped with a no-cook cream cheese frosting. It is a cake that is often served at a party.

Some believe it originated during the Victorian Era when people started getting more fancy with desserts. Some even claim that it was invented in America’s Deep South.

The origin of the red velvet cake may also be attributed to World War II. Unprocessed cocoa was commonly used during that time. Beets were also popular as cake ingredients during that time.

Until recently, red velvet cake was considered a relatively recent American dessert. The name was a reference to the color of the frosting. However, the cake itself has a rich history.

In the late 1800s, velvet cake recipes started appearing in cookbooks. These cakes are made with a rich mix of ingredients, including almond flour, eggs, and buttermilk. They may have looked more like biscuits or pancakes than cakes.

Red velvet cake is still served at upscale bakeries on both coasts. As a result, it has earned its place in the canon of classic American desserts.

Although red velvet cake was rust-colored initially, it has transformed over the years. A chemical reaction between key ingredients caused it to turn a deeper reddish tone naturally.

Traditionally, Red Velvet Cake is topped with cream cheese frosting, but there are several other options. Depending on your preference, you can make a lighter version, with mascarpone cheese or whipped cream or a more decadent version, with buttercream or Greek yogurt.

Some people like to use lemon extract, almond extract, or vanilla extract to flavor their cakes. These flavorings complement the cream cheese and chocolate flavors in the cake.

To make the frosting, you combine cream cheese, powdered sugar, cocoa powder, and heavy cream. This gives your red velvet cake a rich chocolate flavor. To make it vegan, you can use coconut oil, plant-based milk, or even vegan butter.

If you make a vegan cake, you can replace some of the butter with a vegan substitute. You can also make a vegan version of the frosting by substituting Greek yogurt for cream cheese.

If you are looking for a more traditional recipe, try the Betty Adams recipe. It is labeled as “original.” It includes buttermilk and cocoa powder, along with cake flour.